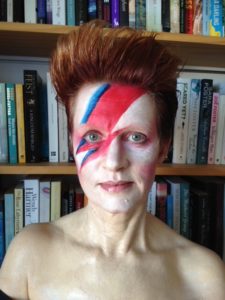 Jesse Blackadder, my co-creator on the ‘Dream Riders’ series of novels for young people – and principle author of Book Two in the series: Storm) died this year. Six months ago, during lockdown, after a short and unexpected illness. As well as her grieving partner and family and friends, she has left behind an important cultural legacy: the Storyboard program. Founded by Jesse in 2016, Storyboard brings writers into schools to run writing workshops in the Northern Rivers region of NSW where we both lived. In that short amount of time it’s already reached over 27 000 young people, not to mention the many workshops and presentations and writing groups for young people that she facilitated and gave.

Jesse’s work in regard to reading and writing reminded me of the pro-choice activism of the 80s and 90s in Australia, and the work of Barak Obama in the projects of Chicago before he became President. It was practical, and real. It was all about making fiction, and the idea of being a writer, and that writing is for everyone, come true – particularly in children’s lives.

It’s so easy for books and writing to become elitist somehow – I’m not sure how or why it happens. Maybe because it’s stored in a special place called ‘the library’? Or because TV and internet and sports all compete so hard in the market place, and somehow are more successful at being branded as being for ‘everyone’?

What Jesse stood for was absolutely the opposite of that. She was all about participation, and making books and writing relevant in everyday life. I remember the time she posed as Ziggy Stardust cover on the cover of our local paper, to promote our local writers’ festival – it was such an unexpected thing for ‘a writer’ to do, and she was always like that: so vital and energised and dynamic, always making reading and writing an active thing. There were also her amazing coats which she wore for kids’ events, and also to her launch of her latest novel, ‘Sixty Seconds’.

I think for Jesse it felt natural to be like that, but for someone like me – who can so easily become so introverted – it’s what I aspire to and admire and want to do, but can find really difficult. As a lot of writers do, which is also perhaps how fiction’s reputation can sometimes start languishing, because its practitioners are not ‘out there’ enough. There aren’t many artists like Jesse, particularly not here in Australia, and particularly not in books and writing.

She also, to me, embodied a great Australian tradition that I would like to see reclaimed, of art and culture and ideas and creativity being a normal part of everyday life – as vital to our health and wellbeing as exercise, or good food – and as being for everyone. This has always been the case in Australia, and small town Australia especially.

For example, my grandfather Alton Budd, was an exceptionally fine bass-baritone singer. He was highly accomplished, as well as exceptionally talented. He sang with the Queensland Symphony Orchestra and he won – among many other accolades – the ABC National Radio Eisteddfod. He also had four children – with his wonderful wife, my grandmother, Agnes McDonald – and a shop to run, Budd’s Farm Supplies, in Murwillumbah, in the Northern Rivers, where he and his family had lived for generations.

My Papa could not have been more Australian, or more passionate about the arts, and there was no contradiction between those two things. In fact, they could not have gone better together. Jesse was continuing in that great Australian tradition, and that great small town tradition, of making your own fun, and being disciplined and passionate about it. I want to see that tradition of sharing and promoting the arts in our lives be reclaimed again.

And people like Jesse – professional and accomplished – are key to that. She inspired people, and brought the glamor factor of being a published author (and her coats!) to kids who would have had no idea, before they met her, of how to even begin to ‘get there from here’ with their writing. Whether or not they become professional writers is not the point – and generally, actually, I hope they don’t, because in the main it’s a difficult life, and I don’t think you should do unless you have to; unless you just can’t not. But practising writing and becoming more expressive and finding your own voice is life changing, and the key to all of our futures in a way that nothing else is.

There are many studies and statistics which prove that literacy is the key factor in women’s prosperity worldwide, and therefore in children’s prosperity, and that has positive impacts all the way up from simple reading and writing to having a truly representative democracy, a sustainable environment, and a community we all want to live in.

Jesse was a very rare and precious gem in the world of fiction writing. I’m inspired by her, and committed, in these ways, to following in her footsteps. And, of course, still stunned, and still devastated, that she is gone.

You can read more about Jesse’s life and work here: https://www.smh.com.au/national/author-inspired-children-with-love-of-writing-20200626-p556f1.html

You can learn more about the Storyboard writing program which Jesse created here: https://byronwritersfestival.com/storyboard/about-storyboard/

And of course you can visit her website at: www.jesseblackadder.com

Below: Jesse in one of her colourful shirts. Photograph by Alan Close.