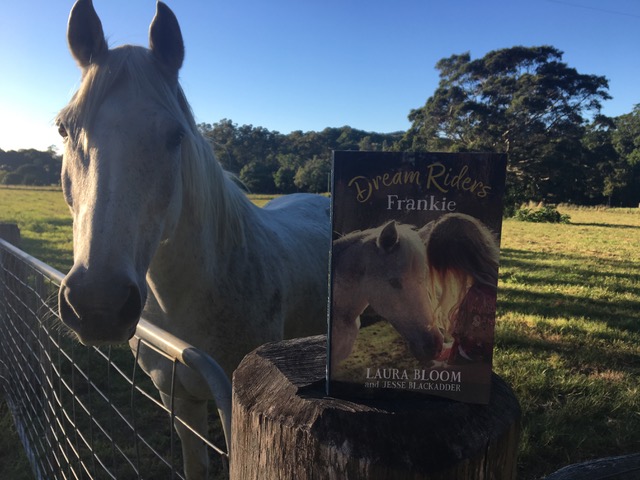 Frankie is Book 1 in the Dream Riders series – a new middle-grade series I am co-writing with Jesse Blackadder, about horses, friendship and being true to yourself.

The novels follow the lives of the Dream Riders as they enter the magical world of Pocket of Dreams ,and learn to ride without saddles or bridles, using only skill and rapport to direct the horse. It’s a skill they must draw on in every aspect of their lives, as they face their own challenges.

The series sits within the classic tradition of stories about young people and horses – books like My Friend Flicka, The Black Stallion series and The Silver Brumby series.

Here’s a little bit more about Book One:

Frankie’s dream is more like a nightmare when her new horse turns out to be Zen – a shaggy, disobedient clown of a pony, who will totally wreck her chances of fitting in at Pony Club in her new town. Zen is everything Frankie doesn’t want – until the magnetic horse whisperer Shannon shows her just what Zen could be if ridden freely.

Natural horsemanship opens up a whole new way of riding and a whole new world of connection between Zen and Frankie. But Frankie’s dad is getting more depressed after her parents’ divorce, and her best friend Kai is keeping a secret. Then Shannon announces she’s closing down her riding centre. Frankie’s got an idea that could save it. Three ideas, in fact, but can she and Zen rise to the challenge?

Storm, Book 2 in the series, will be released by Walker Australia in September.

Available in bookshops across Australia, as well as online at Booktopia, Fishpond and Amazon, etc.